Hi, what are you looking for?

The US government’s Summit of the Americas started on June 6 in Los Angeles, California. And the event proved to be a major diplomatic failure for the Joe Biden administration.

Washington refused to invite the socialist governments of Cuba, Venezuela, and Nicaragua.

So to protest this exclusion, the presidents of Mexico, Bolivia, and Honduras boycotted the summit. Guatemala’s president also chose to skip the conference.

This means heads of state representing Latin American countries with a total population of more than 200 million people – a significant percentage of the Americas – refused to attend Washington’s Summit of the Americas.

“I am not going to the summit because not all of the countries of the Americas were invited,” AMLO explained in his morning press conference on June 6.

“I believe in the need to change the policy that has been imposed for centuries, the exclusion, the desire to dominate, the lack of respect for the sovereignty of the countries and the independence of every country,” the Mexican president explained.

Mexico's President AMLO said he refuses to attend the US government's Summit of the Americas, protesting the exclusion of Cuba, Venezuela, and Nicaragua

AMLO condemned US "hegemony" and its "old policy of interventionism," of "lack of respect"

“There cannot be a Summit of the Americas if all of the countries of the American continent do not participate,” López Obrador continued. “We consider that to be the old policy of interventionism, of a lack of respect for nations and their peoples.”

AMLO criticized the US Republican Party for its “extremist” positions against Cuba and racist policies against immigrants. But he also pointed out that some prominent figures in the Democratic Party, such as New Jersey Senator Bob Menendez, have also contributed to “hate” against Cuba and hawkish meddling in Latin America’s sovereign affairs.

“I don’t accept hegemonies,” AMLO added. “Not of China, not of Russia, not of the United States. All countries, no matter how small they are, are free and are independent.”

López Obrador said that Mexico’s foreign minister, Marcelo Ebrard, would instead attend the Summit of the Americas.

AMLO’s absence is especially significant given that, in addition to being neighbors with a 3,000-kilometer border, the United States and Mexico’s are each other’s top trading partners.

Mexico is the second-largest country in Latin America, in terms of population. It also has the second-biggest economy in the region.

Joining AMLO in condemning the US government’s policy of exclusion was Bolivia’s socialist President Luis Arce.

Bolivia’s foreign ministry confirmed on June 6 that Arce is not joining the summit either. Instead, the country’s ambassador to the Organization of American States (OAS), Héctor Arce, is attending.

In a Twitter thread the week before, Arce insisted that “it is time for the government of the United States to put an end to the senseless and criminal economic, commercial, and financial blockade that weighs on Cuba, as well as the more than 500 unilateral coercive sanctions imposed on Venezuela and Nicaragua.”

The Bolivian leader added, “With blockades and sanctions, a sustainable, resilient, and equitable future will never be able to be built in the hemisphere, as the next Summit of the Americas is proposing.”

Honduras’ new left-wing President Xiomara Castro is boycotting the Summit of the Americas as well.

On May 28, Castro tweeted, “I will only attend the summit if all of the countries of America are invited without exception.”

On June 6, the Honduran president made good on her promise, and her government confirmed that Foreign Minister Eduardo Enrique Reina would attend instead.

While the majority of the leaders not attending the Summit of the Americas are left-wing, even Guatemala’s right-wing president, Alejandro Giammattei, announced that he will not be present.

Several officials from Giammattei’s government have been sanctioned by the United States, and he is protesting the Biden administration’s policies with his absence.

The Caribbean Community (CARICOM), which represents 15 states, similarly threatened to boycott the summit if Cuba, Venezuela, and Nicaragua were excluded.

Several countries in the Caribbean did confirm they are attending, however. It is not clear how many are boycotting.

Brazil’s far-right leader, Jair Bolsonaro, had initially threatened not to attend the summit. Washington responded by promising Bolsonaro that it would welcome him to the White House and give him one-on-one meetings with Biden.

The far-right Brazilian autocrat thus changed his mind and decided to attend.

Bolsonaro is joined by the right-wing leaders of Colombia and Ecuador, as well as the centrist leaders of Chile and Argentina. (The conservative president of Uruguay, Luis Lacalle Pou, had planned to join, but was ultimately unable to do so because he got Covid-19.)

The Summit of the Americas was first convened by the United States in 1994, after the end of the first cold war, as a way for Washington to expand its hegemony in Latin America and the Caribbean.

That same year, the US government signed the North Atlantic Free Trade Agreement (NAFTA), a neoliberal deal with Mexico and Canada, which devastated Mexico’s local economy and fueled a wave of mass migration.

Numerous grassroots organizations, left-wing social movements, and labor unions have organized an alternative People’s Summit for Democracy to protest the US government’s Summit of the Americas.

The People’s Summit is hosting a series of demonstrations, panels, concerts, and cultural activities in California from June 8 to 10.

‘World War 3 has already started’ between US and Russia/China, argues French scholar

The US is already preparing for its next war: on China 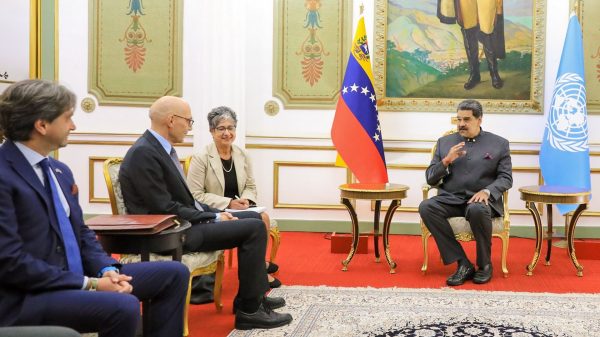 Former CIA analyst Fulton Armstrong told The Guardian that, in Cuba, "a lot of the so-called independent journalists are indirectly funded by the US"....

The US claimed unelected coup leader Juan Guaidó was "interim president" of Venezuela from January 2019 to December 2022, when his former allies in...